Electricity ‘the fuel for the future’: the amendments to the GLA’s Energy Strategy and how that affects buildings design

From the 1st January 2019 the GLA will be accepting Energy Strategies with the latest electrical carbon dioxide emissions factors. The carbon dioxide associated with electricity has halved due to the success of UK’s commitment to renewable energy production. The result will significantly change the methodology as to how new build developments will be provided with heat. Mark Bryan, Building Services Director, details the amendments and how building services design will respond. 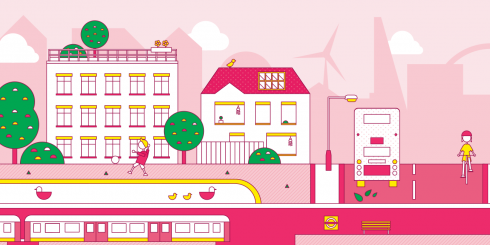 “For 14 years, I’ve been involved with calculating and writing Energy Strategies for Planning Applications within the GLA and its Boroughs. Though, this has mainly been across the mixed use, education and the residential sectors, we’ve been full circle, electric to gas, now back to electric, as the preferred heat strategy.”

Firstly, electric, concerns of the price of electricity versus gas and heat affordability dismissed electric in favour of gas forms of heating. This was then enhanced by the changes to Building Regulations Part L 2006 & 2010 which made gas heat significantly more carbon efficient versus electricity. Over the past 10 years Energy Strategies for large scale residential led schemes have written themselves, low U-values, mechanical ventilation with heat recovery, a combined heat and power (CHP) heat network and perhaps a form of renewable energy (Solar Photovoltaics) in the main. Whilst this strategy has ticked many a Planning Policy box, there has been much pressure from the mounting evidence that this is not the correct solution to all. There are many a story from Development Managers, Facilities Managers and Customer Care team managers that will have dealt with overheating issues in communal corridors, classrooms and apartments themselves. There are a multitude of factors as to why but in the main; too much glazing, not enough openable window area and heat losses from centralised heat networks are the chief culprits.

Whilst there are design solutions around these overheating issues and well designed and built examples of these heat networks out there, operating in a highly energy efficient manner. However, the GLA Energy Officers have had to listen to the latest technology changes.

So what are the main changes?

Firstly and most significantly the carbon emission factor per unit of energy consumed for electricity has halved. Therefore the same amount of electricity that was consumed previously is a cleaner fuel. In dwellings particularly the heat (Hot Water) is the most significant energy consumption which has been typically provided by gas sources (either boilers or CHP led district heat networks). The associated carbon dioxide savings where achieved through the electrical production from the CHP, which under the GLA carbon factors have halved.

For large scale schemes, of over 100 dwellings, we may not be going back to electric panel radiators and immersion cylinders, as the cost per kWh of electricity is still significantly higher than gas but a heat pump solution leading a low temperature centralised heat network.  Heat pumps operate at higher efficiencies than direct forms of electric heat, therefore reducing the kWh consumed and associated running costs. Heat generated by pumps is distributed at lower temperatures than CHP led networks which should mean that ‘hot corridors’ should no longer be a design issue. The heat pump solution doesn’t require the amount of thermal storage in main plantrooms, with local hot water cylinders going back into the dwellings. This should free up more space at ground floor or basement level for additional car parking, even an additional dwelling/retail space in some circumstances. The downsides, the UK’s electrical infrastructure, taking gas out of the energy mix places more pressure in delivering more electrical power through the national grid and certainly more local sub-stations will be required, which has associated development cost. Initial construction costs are similar to that of the CHP led heat network and our early calculations still show that a carbon offset payment will apply as a heat pump solution with low U-values will achieve around a 50 % carbon dioxide reduction. However the CHP option under the latest carbon emissions factors is around the 20 % mark, whereas previously it was 40 – 50 %, therefore will need a form of renewable technology to hit the 35 % carbon dioxide requirement.

The future is very much shaping up to be an electrical powered one, with the car industry heading electric, the national grid is being ‘cleaned’ with more renewable energy coming onto the grid (in fact it was well documented that on a few days last summer the UK produced more electrical renewable energy than the country consumed). It’s important to remember that the UK Building Regulations (Part L) haven’t updated to reflect this and are under consultation. There are still emerging technologies i.e. commercial batteries that are likely to come into the mix, but for now the future is looking electric, or at least until policy changes again.