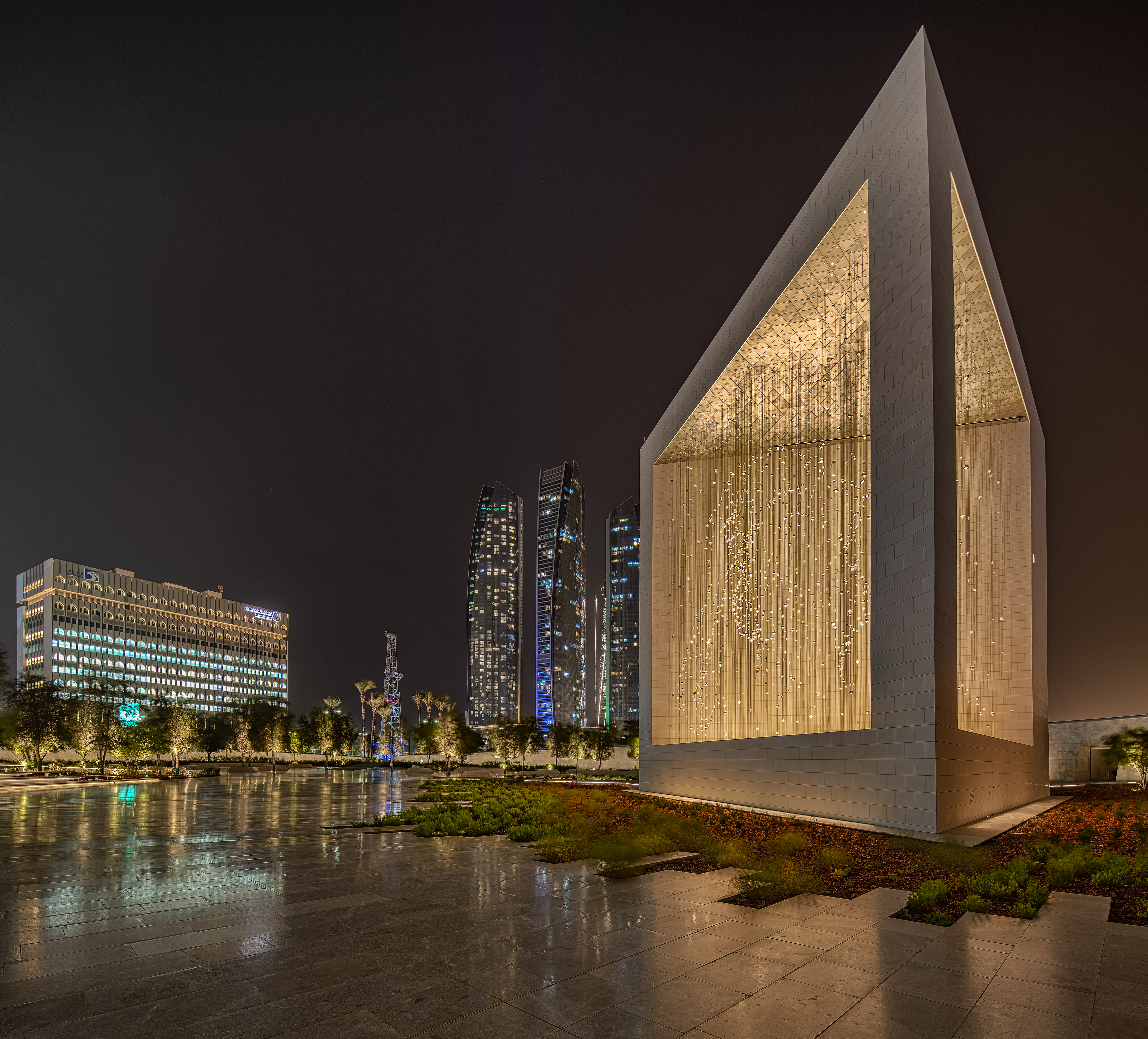 It has been three years since the stunning Founder’s Memorial on the Corniche in Abu Dhabi, was opened to the public.

The event coincided with the 100th anniversary of the birth of the man it pays permanent tribute to, the late founding father of the United Arab Emirates, Sheikh Zayed bin Sultan Al Nahyan.

At the heart of the memorial is the Constellation, a monumental artwork whose 1,327 geometric shapes align to create a dynamic three-dimensional portrait of the Founder.

And this is the story of how the incredible project was delivered.

The clock is ticking

Meinhardt UK was appointed as leading multidisciplinary consultant to deliver the Founder’s Memorial in 2016.

The challenge was considerable. Having inherited an initial scheme from the previous design team, we were given just six months before the start of the works on site.

Whilst staying true to the vision for the site, we would need to develop and deliver the necessary changes to the scheme to ensure the entire project could be built on programme.

We would act as lead designers, delivering construction information for architecture in collaboration with experts in our structural and civil engineering and building services teams.

And we would also be responsible for the complete supervision of works on site.

The success of this prestigious project would rely on developing unique and practical engineering solutions in a very short period of time, and in optimising coordination between different design and engineering disciplines.

The date of the public launch was set for Sheikh Zayed’s anniversary, there could be no delay. 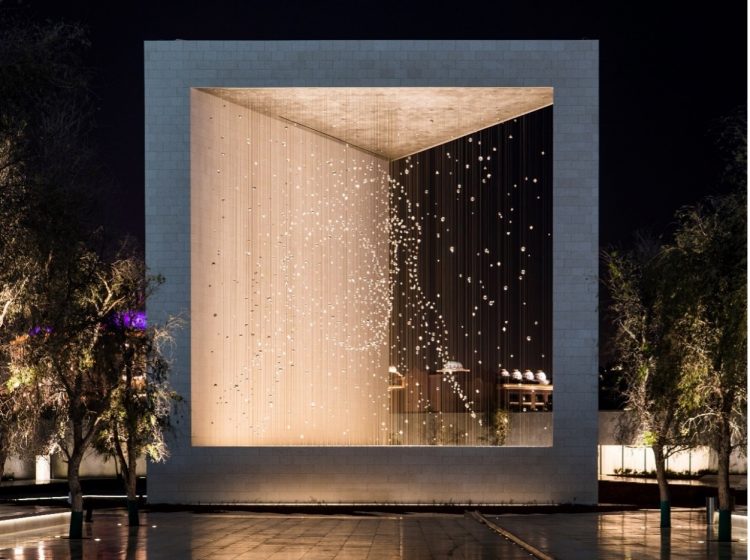 The vision for the site

Located along the Corniche on a site adjacent to the Emirates Palace in Abu Dhabi, the Founder’s Memorial is a permanent national tribute to the UAE’s founding Father, the late Sheikh Zayed bin Sultan Al Nahyan.

Comprising more than 48,000 sq m of public realm and gardens, visitors are guided through an immersive experience showcasing the history of the UAE and Sheikh Zayed’s life. The centrepiece of the site is the Constellation Pavilion and a 20,000 sq m public plaza.

An elevated walkway surrounds the pavilion, providing stunning views of the artwork and Abu Dhabi skyline.

Designed by US artist, Ralph Helmick, who is renowned for his large scale suspended sculptures, the Constellation is one of the largest art installations of its kind in the world.

Some 1,327 platonic solid objects are suspended on 1,110 thin vertical wire cables, carefully arranged by the artist, to create the portrait of Sheikh Zayed, all set within a 30 metre high pavilion structure.

Visitors begin their journey at the welcome centre with a multimedia and sensory experience showcasing the history of the UAE and life of Sheikh Zayed.

They are invited to enter the centre of the site through a landscaped portal – carved and sculpted within the elevated walkway – that leads them to a series of gardens and water features set in front of the Constellation.

The elevated walkway provides full surrounding views of the sculpture, whilst also housing amenity and functional spaces for schools and groups visiting the site, beneath the landscaped paths.

The walkway structure incorporates most of the plant and equipment servicing the Constellation Pavilion and Welcome centre. 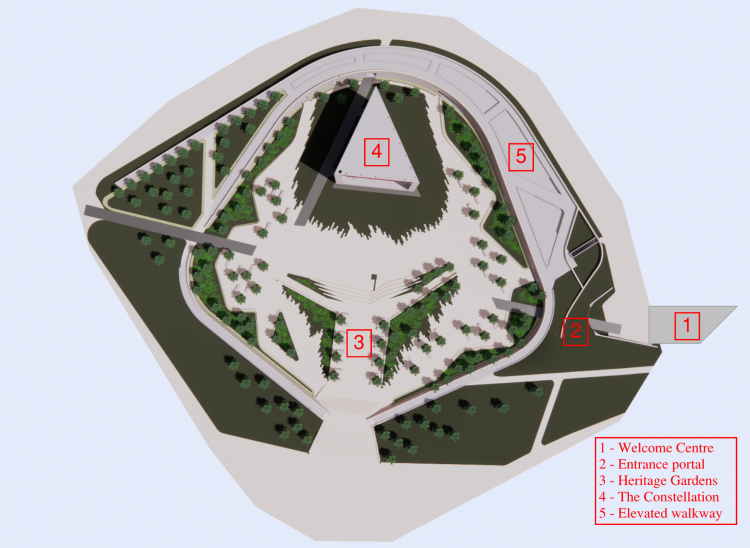 The welcome centre required careful coordination between experts in our structures, building services and architecture teams, to ensure that the space was as intended by the client.

One key challenge was to achieve the thin cantilever roof edge developed by the architects at the front façade of the buildings, within the strict requirements dictated by the frameless glazed façade.

The detailing of the overall structure of the elevated walkway required extensive design development to maximise the available spaces below the landscaped deck. It would need to house all of the required plant areas and functional welcome spaces, whilst still achieving the rigorous seismic requirements for the structure.

Another challenge was that the tight programme could not be achieved with the piled foundations that the concept design called for. To improve on the construction programme, we produced a detailed foundation assessment to prove that the piles could be replaced with a ground bearing foundation solution, working in close collaboration with the contractor’s site team to confirm the bearing capacity of the founding soil strata. This allowed the walkway construction to be brought forward.

Modelling the complex geometry of the walkway structure, especially in areas such as the landscape portal, allowed potential geometric issues to be identified and rectified at the design stage. It ensured that accurate construction documentation could be produced to aid buildability on site, which was crucial to meet the required programme. 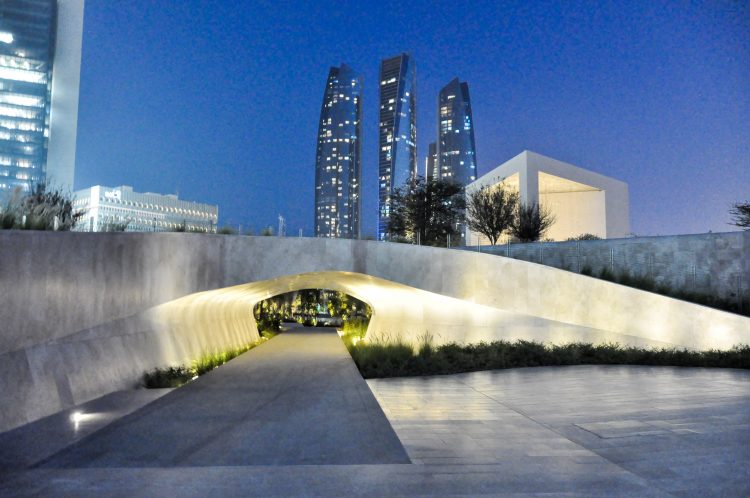 Figure 4: Landscape portal leading the visitors to the heart of the Memorial

The cables are suspended off a 25 metre long span roof of the pavilion structure, that forms a 30 metre portal housing the artwork. Lit by more than 2,000 lights hidden within the roof and deck of the pavilion, the artwork is constantly evolving with the changing light and wind on site.

The pavilion structure also comprises a viewing gallery, which allows the visitor to admire the sculpture through a large Mashrabiya cladding screen, carefully inserted within the limestone envelope. 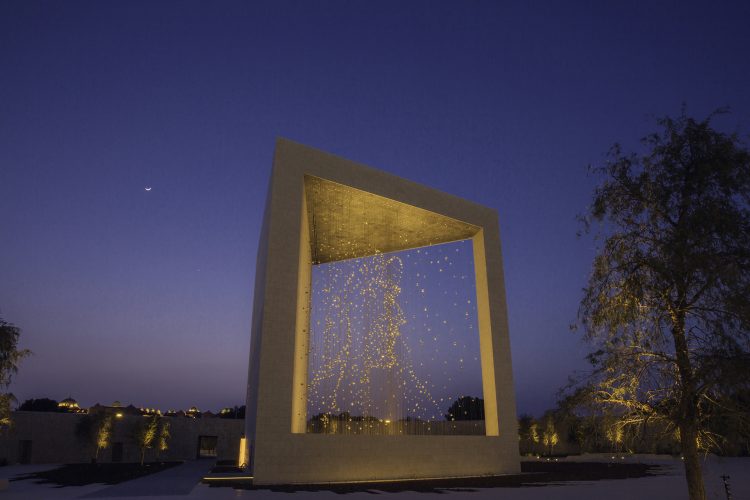 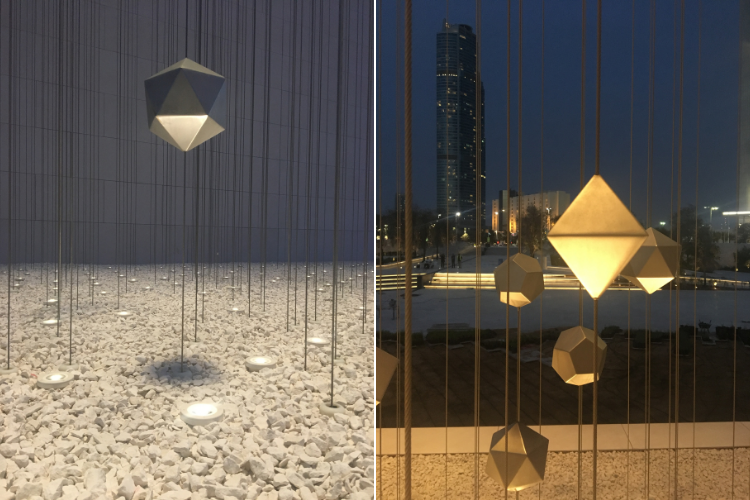 Tension in the cables was the key to the performance of the artwork and in delivering the artist’s vision.

A minimal loss of tension in the cables would result in unacceptable lateral movements of the objects under wind. The initial specification called for a complex tensioning spring system, requiring constant monitoring and adjustments, which also caused extra tension in the cables by restricting their vertical movements under wind loading and temperature changes. This system would have been difficult to install and maintain as by tensioning each additional cable would cause deflections in the support plates, thereby reducing the tension in the cables already installed adjacent to it which would have impacted the performance of the artwork.

As this system was not economically or technically viable, the project would not have been built without an alternative strategy, so we approached the client to develop alternative solutions to meet this challenge.

In response, an original structural solution was developed using gravity as a simple means to ensure constant tension at all times as every cable would be tensioned independently of each other. Steel weights are hung at the base of each cable and hidden from view within the podium space below the deck level. Intricate detailing enables the base of the cable to disappear through the deck finishes and a sleeve through the deck slab allows the cable to move freely vertically under wind loads and to extend and contract under temperature changes.

This solution, developed in collaboration with the artwork specialist contractor, Stage One Creative Services, reduced the stresses in the cables, keeping the cable diameter to a minimum, whilst maintaining a constant tension.

This design was also chosen for its simplicity as it does not require specialists to install and replace the cables.

Figure 7: Section through the Constellation structure

The initial project specification suggested that 6mm cables might have to be used for highly tensioned cables but we were concerned about the impact that it would have on the visual appearance of The Constellation.

Instead, our design achieved 4mm, thanks largely to: 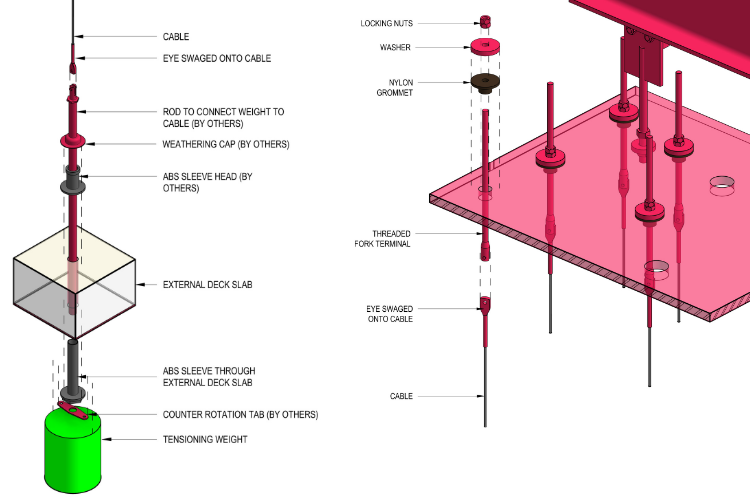 At an early stage, it was identified that the key to delivering an efficient solution was to assess the individual performance of each of the 1,110 cables as well as the complex of closely spaced cables as a group.

The objective was to minimise the risk of clashing between objects on adjacent cables and tangling of cables under high wind.

To visualise where potential clashes would occur, the cables and spherical families representing the platonic objects were modelled within Revit.

Creating a custom script within Dynamo allowed for the artwork geometry to be generated quickly and accurately, processing the large volumes of data contained within the spreadsheet provided by the artist.

Once modelled, Dynamo was used to analyse the performance of the artwork. A complex script was produced to identify objects which were at the highest risk of clashing, taking into account:

The output of this study was used to identify and adjust the tension in the cables which had a higher risk of clashing.

Having determined the tension required, the mass of the weight attached to each cable could be calculated. In areas where cables were in close proximity to each other, there was limited space to place the weights and this problem was compounded by the fact that generally these cables were the ones which required higher tensions and therefore larger weights.

To resolve this VBA scripting – combined with the use of Dynamo and Revit – was used as part of an iterative design process to determine an optimised layout for the weights.

It provided the minimum tension required whilst ensuring that the weights would physically fit in the space available and standardising the diameter and height of the weights to limit the different types.

A modular weight system was developed which was capable of being scheduled, and so allowed for ease of procurement and installation by the contractor.

The solution was made possible thanks to extensive coordination between Meinhardt UK’s structures and M&E teams regarding the space at the base of the pavilion and provision of all of the necessary plant required for it to be serviced. 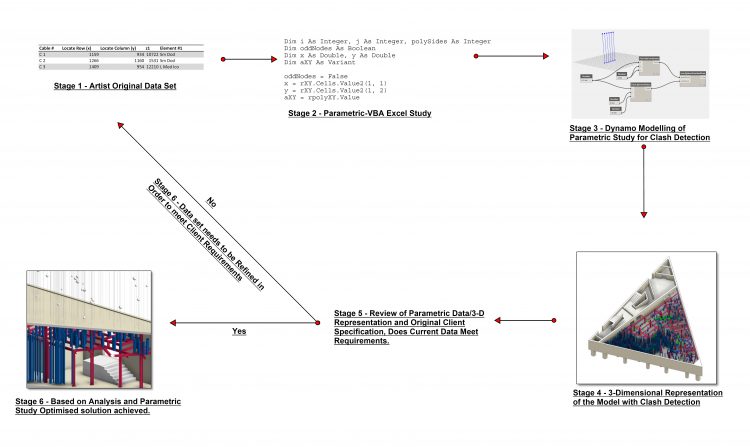 To reduce the construction programme of the pavilion structure and allow maximum erection time for the artwork, we designed and detailed the roof steel frame of the pavilion to be assembled on the ground, and lifted in one go on top of the RC structure.

To achieve the lift of the 150 tonnes frame, we had to carefully coordinate lifting point positions and sequencing with the main contractor, Al Fara’a.

The lift was completed within a day, including installing the permanent fixings of the steel frame onto the RC structure. 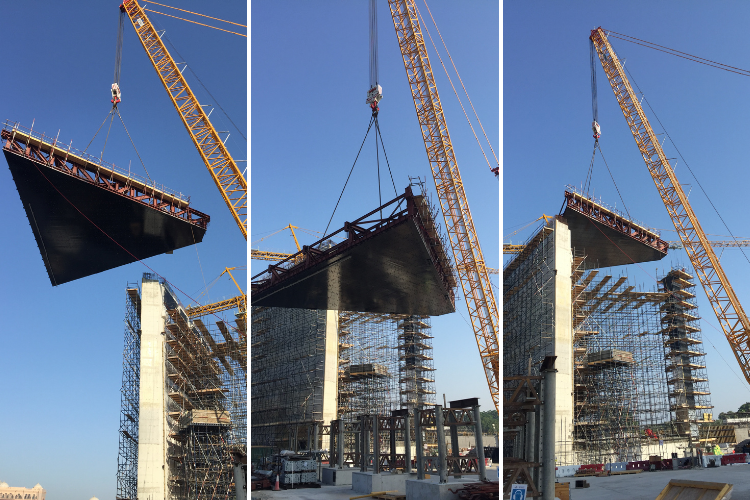 The Founder’s Memorial has already become a focal point of life in Abu Dhabi. A place for local people and tourists to congregate, it has also hosted significant international visits and events, including the Global Conference of Human Fraternity.

His Holiness, Pope Francis, and His Eminence Grand Imam Dr. Ahmed Al-Tayeb, were among more than 400 leaders, religious representatives and cultural and intellectual personalities, as part of the interreligious gathering.

The Founder’s Memorial is also the chosen location for key dates in the domestic calendar, including National Day, Martyr’s Day, Flag Day and Emirati Women’s Day.

It was awarded first place in the CODA Artistic Design Award 2019.

Meinhardt UK has been involved in UK and international projects that have helped transform many of the world’s major cities for more than 60 years.

The Constellation project was delivered by a project team that included: